“I have seen a 15 point gain in math and science scores on the state standardized test, which helped our school meet its AYP/API”, and I have not sent a single student to the office all year. Time To Teach-Classroom Management Training has helped me successfully teach second language learners, children with ADD, ADHD, Tourettes, leaning disabilities, disenfranchised youth, and impoverished students.”

“The number of student referrals in our middle school has dropped 30% on average, every year over the past three years. It is because of the strategies shared with me that I can say with pride, “Every day I teach!”

“The training provided a discipline system that sets predetermined boundaries with a positive approach. Students are accountable for their actions. It is built on a mutual respect for the teacher and student that ensures that teachers can teach and students can learn. It creates a positive classroom environment.”
Dr. B. B., Principal, SC

“During my first two years as principal of this Elementary School, we experienced over 300 office referrals and over 150 out-of-school suspensions! This year we fully implemented the seminar strategies and so far we have only had two office referrals in six weeks!”
J. H., Elementary Principal, North Carolina

The Story of Glenn Livingston Elementary

The Chart below demonstrates the drastic transformation in office referrals Time to Teach had on Livingston K-5th Grade Elementary School in Cody, Wyoming. Even with a mid-year implementation you can see the dramatic effect and the ongoing benefits provided to this school. The first full-year of implementation of the teaching strategies resulted in only 51 referrals vs. the 379 referrals without Time to Teach strategies.

No more low-level referrals were sent because the teachers knew how to deal with them in the classroom. The principal and assistant principal had more time to deal with other educational matters.

No longer was the office referral utilized for low-level behavior. The office staff enjoyed a calmer environment with only one child seen every three days rather than the two per day before. 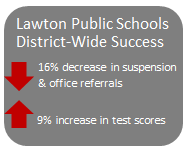 Decrease in Suspensions and Increase in Test Scores!

“Lawton Public Schools is a lower socioeconomic school district in Oklahoma that services 17,000 Pre-K through 12th grade students; over half of which are minority. Twenty-nine of our thirty-five schools were trained using these strategies, affecting more than 11,000 children. Following training, we experienced a 16% decrease in suspensions and office referrals, and a dramatic decrease in pupil enrollment for Behavior Intervention and Behavior Disorder classes. We have also seen a 9% increase in test scores and none of our schools are on the school improvement list for No Child Left Behind.”
B.D. , Executive Director Elementary Education,Oklahoma 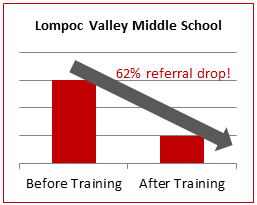 “At our Middle School the referral numbers for class disruption were reduced by 62% using the seminar strategies, and our High School’s referral numbers were lower than those of the rival high school for the first time ever.”
C. C., High School Counselor, Hawaii

In-House Suspensions Cut in Half!

“Our school has our district’s highest number of at-risk 11th and 12th grade students. Using the seminar blueprint, we saw school suspensions drop from 39% to 18% over a three year period, in-house suspensions cut in half, and significant increases in passing rates on the California High School Exit Exam and other student achievement measures. Overall, the school has experienced a positive, systemic cultural change.”

“I have seen some of my students move up from Special Education and Title Programs to achieve at grade level performance. My referrals have been eliminated. Students that were never able to do so before are now meeting benchmark standards and making dramatic gains in reading and writing fluency. After 19 years as an educator, I finally have time to teach with care and compassion.”

A study conducted at Kastner Intermediate

The results shown in these charts represent Semester 1 comparisons over the past four years. The base year is 2008-2009 prior to “Time To Teach”.   (Click on Figures to enlarge) 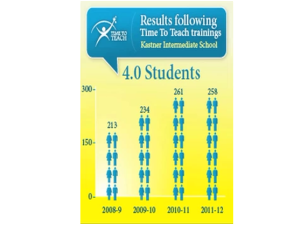 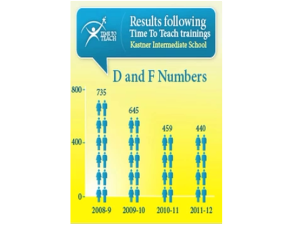 Attendance is up…..Academics are up. 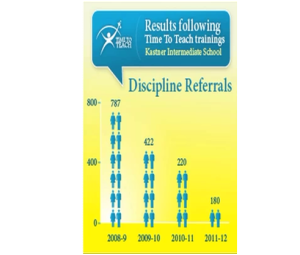 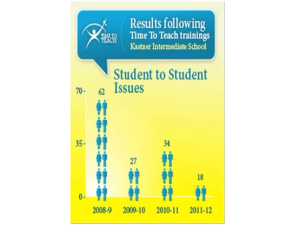 Figure 4: Number of Student to Student Issues (such as bullying) 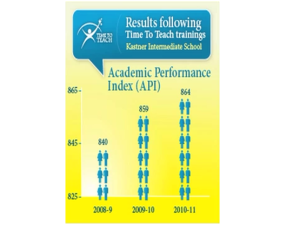